Faster, more flexible and more modern: Upgrade for the biz²ScanServer by inPuncto! 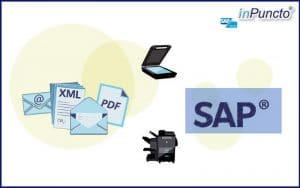 What’s new? What are the changes? Why is the upgrade to version 2.6.72 worthwhile?

To find out, we interviewed our developers.

Bernd: I am Bernd and have been working for inPuncto for nine years now. My main task is the software development of the biz²ScanServer.

Johannes: I’m Johannes, I’m also a software developer and I’ve been at inPuncto for almost nine years now. I am responsible for components, meaning the “small software parts”, which are integrated as building blocks in system architectures such as the biz²ScanServer.

B: The biz²ScanServer is a program running in the background as a Windows service being able to process work assignments for various corporate sectors. The classical fields of applications are the processing of documents, e.g. invoices or personnel documents and the transfer of the results to SAP.

The biz²ScanServer offers manifold possibilities to process digital documents and provides various input channels: The incoming data can, for example, originate directly from SAP, from file system directories or also directly from e-mail attachments, which are created by e.g. scanners/multifunctional devices and of course also directly from incoming e-mails for the most diverse e-formats, like ZUGFeRD, XRechnung and other XML invoices. The biz²ScanServer can process single documents as well as document batches containing all sorts of documents. Barcodes are used in order to separate single documents of a document batch.

J: The name “Scan” Server comes from the fact that it was previously only intended for processing scanned invoice documents. Today it can be used with appropriate extensions and programming for all possible tasks.

Why is there a new version of the biz²ScanServer?

B: The old biz²ScanServer was a successful model right from the start – but the beginning is a long time ago, to be exact it was 2003. That’s 15 years and a lot has happened technologically!

Although we have also repeatedly adapted the old version and implemented the corresponding customer wishes, there comes a time when a redesign of a successful model is necessary in order to be prepared for the future and to be able to react to new technologies.

The new version is therefore also based on a new concept that builds functionally on the old version, but has a software architecture that allows it to react flexibly to future market developments. Due to our long experience we know exactly what customers want, what they need and in which direction the market will develop – and this knowledge also made it easier for us to design the software behind the new version of the biz²ScanServer.

J: In the course of time we found again and again new task areas, which could be covered with the biz²ScanServer. But also our customers wanted different extensions. Gradually more and more things were added which the biz²ScanServer could process, e.g. personnel files for the HR area, reading of incapacity certificates, counter cards… With the previous biz²ScanServer adaptations had to be made directly in the program code. This was complicated and expensive. The new version can be configured more flexibly so that we can react better and faster to customer requests in the future. For requirements that go beyond the configuration options, a higher degree of modularization also makes it easier and more cost-effective to implement new things.


B: In summary, it can be said that the new version takes both existing and new requirements into account and also contains a vision to meet future requirements.

What strongly desired customer requirements have been implemented?

B: For many of our customers, whose business has grown in recent years, the desire for faster processing with a simultaneous increase in the volume of documents and an increase in use cases within the scope of digitization was the first priority. The customer can choose the scaling of the performance by the number of logical processors. The biz²ScanServer parallelizes and distributes the jobs – its total computing power is massively increased.

J: Higher overall computing power is an important issue for processor-intensive things such as text recognition (“OCR/ICR”). We humans, for example, can only read so fast because we have billions of nerve cells in our heads, which can be seen as the equivalent of the processors in the computer…

B: Another benefit of the new biz²ScanServer is the increased flexibility in the configuration of incoming mail e.g. several attached invoices of a mail can now be processed simultaneously. Another e-mail inbox handles e-formats such as ZUGFeRD or xRechnung or other XML invoices. Another e-mail inbox processes invoices and GTC in the e-mail and much more.

Why should users upgrade?

B: In general, because many customer wishes and requirements have been met with the new version. Now it is much easier to analyze the performance and identify time wasters – the biz²ScanServer consists of a server component and an administrative client component, which e.g. enables such a performance analysis. Previous performance analyses were only possible via a time-consuming analysis of the log files.

J: Yes, that’s right, and the fundamental change with the new biz²ScanServer is that we are now recording statistics and displaying the statistics in the administrative client component. For example, it is often the case that SAP communication is slow or conversions or text recognition are time-consuming. The statistical data then tells us exactly where to start in order to improve performance.

B: I find the possibility that you can see in the biz²ScanServer client very exactly which client or which component took how much time for what very useful, because it allows you to identify the bottlenecks in the performance very accurately.

J: The new connection component between Microsoft and SAP is also particularly successful. This makes many other things possible. For example, it supports SAP Landscape: Here it is defined which servers the users and thus also the biz²ScanServer logs on to. So far these instructions were stored in files on the respective computers, in SAP Landscape this can be defined centrally.

What were the biggest challenges in the development?

J: A big challenge was that several logical processors work in parallel. Now the biz²ScanServer can do several jobs in parallel. If you do several things at once, you can do it faster, but you can also overload a system with it. In the beginning, we repeatedly came up against limits at this point, but then we found a suitable way so that the biz²ScanServer is secure and stable multitasking capable.

Thank you for the interview!

If you have any questions about the upgrade or if you are interested in the conditions, please contact us at support@inpuncto.com.