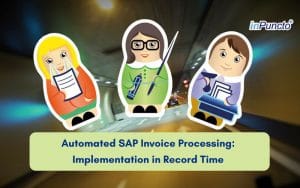 Our customer is a steel wholesaler based in Switzerland and employs around 900 people. The group comprises a total of six companies operating at many locations in Switzerland. The individual company codes have been technically and organizationally combined into a single company code to reduce the invoice volume. Approximately 60,000 supplier invoices with approximately 120,000 invoice pages are to be processed annually, with the trend for the number of invoice pages increasing in the coming years.

Special challenge: The race against time

With our inPuncto solutions, scanning, archiving and the invoice workflow of supplier invoices and their attachments were realized. The particular challenge was the rapid implementation of the project, as the solution for processing the invoices was to be put into productive operation at the same time as the company codes were merged.

With us, the customer has found a partner who was able to implement this quickly and reliably. This was achieved thanks to the lean additional software that could be implemented directly in the existing SAP system and the extensive standard functions. The project was even finalized before the planned date in a record time of 7 weeks!

Automation of supplier invoice processing in SAP at our customer

Altogether we have used the following inPuncto solutions: The inbox processor biz²ScanServer, the scan client biz²Scanner and the workflow tool biz²DocumentControl.

MM documents are automatically checked, compared with the data in SAP, and if everything is OK, released and booked. If values differ, the release is carried out via workflow depending on the amount, either by the division heads, CFO or CEO. The agents are notified via mail about the workflow tasks and can answer the requests using the SAP GUI. Some users also have the option of processing queries via the web interface or a mobile application. Invoices can be rejected to suppliers with just a few clicks.

Modular solution for SAP with the possibility of extension

Since our SAP add-ons can be combined with and among each other as required and the individual products can be customized to the individual needs of customers, it is also possible to extend the scope of functions at a later date. For example, paper personnel files can also be transferred to the SAP system with the biz²Scanner and biz²ScanServer.

Due to the very good communication between the two teams and the forthcoming merger of the company codes, the cooperation worked so well that the project could not only be completed extremely quickly, but also before the deadline. In only 7 weeks we have installed, configured, tested and put the additional software into production. Our customer is as delighted with the fast project implementation as with the new functions that make invoice processing faster and more secure!