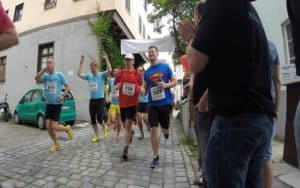 Last sunday (july 3rd 2016) the EZ-race took place in Esslingen, Germany.
At 11am the main race started. The contstants had to run four rounds of 2,5 kilometers through the old city center of Esslingen.
inPuncto also participated in the run. Even this year the members of tradition-ES had been the biggest participating group.
Families, friend and fans of all contestants met, to support the runners.

After the race the contestants and their supporters could relax in the courtyard of the brewey „zum Schwanen“ with a traditional chill and grill. Star cook Rolf Straubinger spoiled everyone with an amazing three-course-menue, beer and of course non-alcoholic drinks. Pandoro-Esslingen prepared delicious pancakes for everyone. The evening whiled away with the cool and hot running beats by DJ Sir Randolph and some nice conversations.

The members of tradition-ES beared all the expenses for the celebration. That´s why all donation will be used for a project to support the elderly.