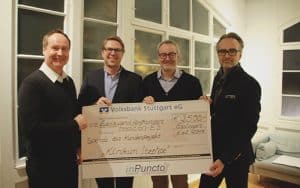 The donated funds are for social projects for the elderly

On Friday, December 1st, inPuncto’s CEO Dr. Frank Marcial handed over donations to the entrepreneur network ‘tradition-ES’ in the amount of 2.500€.
The donated funds had been collected in the course of the customer’s project ‘Klinikum-Itzehoe‘.
inPuncto had decided to donate the funds to ‘tradition-ES’ to support projects for the elderly in the greater Esslingen area. The network members (22 CEOs from Esslingen) commit themselves to charitable projects for seniors on a voluntary basis and organize, among others, feasts in retirement homes. inPuncto’s CEO Dr. Frank Marcial is also a member of the charity network and is fully committed to help our elder generation.